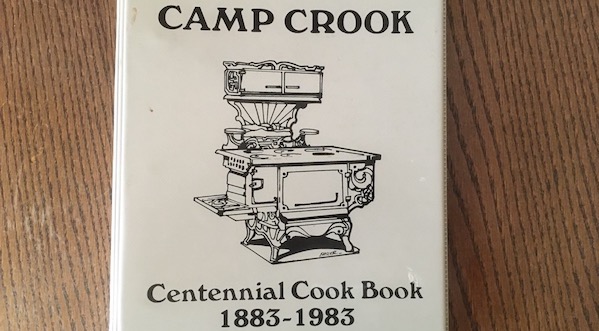 The Camp Crook Centennial Cook Book holds a special place in my heart. This little town on the prairie, population 92, celebrated its centennial while we and our baby boy lived there. Cooks from all over Harding County submitted recipes, and I don’t think any were turned away. It was the first publication to accept and feature my work.

All in the form of recipes.
All for foods my mom taught me to cook.
Almost all of them being desserts.

Which just goes to show I’ve had my priorities straight since a young age.

I found this little cook book to be valuable primary source material while I wrote and rewrote at least 10 times–yes, that’s right, 10 times–See Jane Run! Paging through it and seeing familiar names beneath recipes brings back memories of life in a place where the “old timers” had lived in soddies and shacks built by their homesteader parents.

My favorite section is the one for candies and old time recipes. It contains recipes for homemade soap, grandma’s sweet pickles, hand lotion, corn cob syrup, homemade mustard, and something called “stir up in a bucket.”

I have no idea what “stir up in a bucket” is. The first sentence in the instructions which reads as follows–”Add enough bacon grease to keep it from sticking to pan”–doesn’t have me rushing to try it for supper any time soon.

Though I might give it a try to because it has the potential to be a great scene in the sequel to See Jane Run!, which is called Hear Jane Sing!

Before I mix up a batch of “stir up in a bucket,” I’ll post the recipe here in a month or so. Then all of you can give it a whirl with me, and we can talk about how to incorporate it into the story.

Until then, I suggest you try this recipe for fresh peach pie. It’s in the Camp Crook Centennial Cook Book, and I can vouch for its deliciousness. I’ll be making it as soon as the Colorado and Missouri peaches appear in the grocery store just like in 1983 when the little town where I once lived turned 100 years old.