No Sweat for This Fantastic Friday 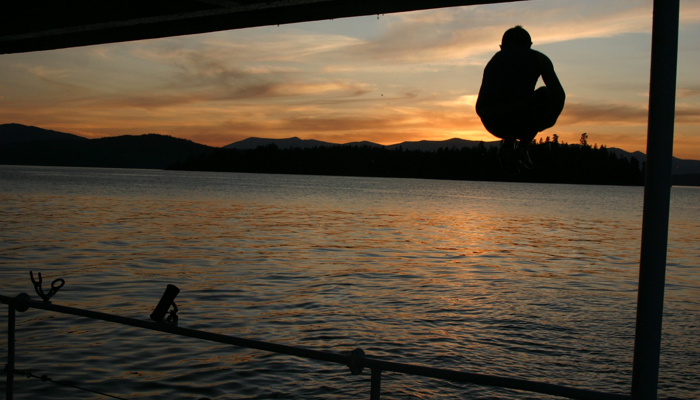 This Fantastic Friday post looks back at a favorite camp memory…four generations of family enjoying a magical evening on a houseboat. Though that was our one and only houseboat adventure, my camp job is still photographing the week’s events while other people sweat and toil on logging, construction, and cooking crews. Life doesn’t get much better than this!

Though we’re not at Family Camp any longer, I wanted to share a photo taken during Friday night’s jumping-off-the-top-deck-of-the-cruis-boat-highest-cannon-ball-splash-contest. I took hundreds of action shots, hoping to get a few good ones, and ended up with this one of the Jolly Green Giant crouching on a mountain top.

One of the pillars of Family Camp is a couple hours of hard work for everyone, every morning. Some people do sweaty and generally disgusting work like digging trenches, insulating walls, hanging sheet rock, mudding seams, logging, or hauling rocks from the river. Others do fun but complicated work like fixing three meals a day for 30 – 40 people.

A couple years ago I was asked to be camp historian and photographer. “So,” I asked by way of clarification while stilling the little flutter of joy that comes with being excused from sweaty, disgusting work and kitchen duties, “you want me to take pictures and write commentary about people doing sweaty and disgusting work and the cooks in the kitchen?”

I waited for him to say, “Fooled ya’. Grab a pick ax, sucker,” but instead he said, “Have fun,” and walked away. I jumped on that order like a tick on a dog’s back and have been wielding my camera and computer ever since. But guilt has plagued me all along, when cool, clean and sweat free, I record the hard work and play of others.

But this year the guilt evaporated when I started running a slide show of each day’s pictures after supper. People smiled and laughed and remembered as the pictures floated by. And I finally understood the boss man’s wisdom in rustling up a camp historian. The construction and preservation of memories, while not sweaty and disgusting, is as necessary as cabins and meals. The record of our time together is shelter and food for our souls.

Thanks, Tom, for knowing what our hearts need and allowing me to provide it. I’ll do it again next year, no sweat.