Finding Beauty on this Fantastic Friday 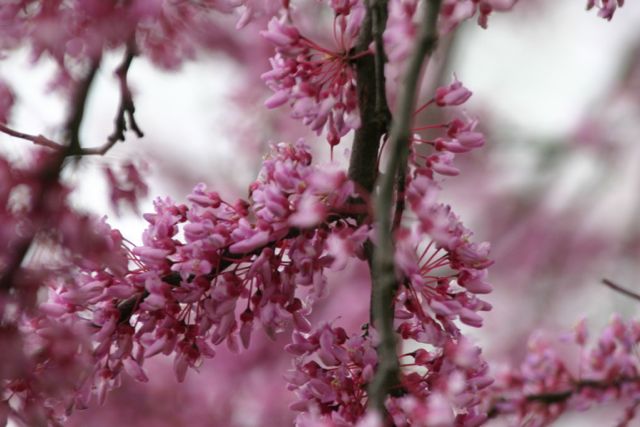 The red buds are blooming in our neighbor’s ravine again. They are as achingly beautiful as they were at the end of April last year. Twelve months ago I wrote this post, and though I feel better than when this post appeared in April of 2015, the words written in it are as true on this Fantastic Friday as they were then.

Finding Beauty in a Not Very Easy Week

The week just past was not an easy one. Last Sunday, I was finally home for a good long while after months of speaking engagements and Grammy duties, with no book deadlines looming. Don’t get me wrong, all of the above are good–even great and blessed–events. But they were wearying, too, and I naively thought that the week would be devoted to creative activities that rejuvenate me…like finally getting back to poor, patient Jane and her languishing mystery novel. That didn’t happen.

Because I had forgotten that the first several days after being gone
are devoted to catching up on everything that piled up in your absence.
Laundry.
Mail.
Email.
Bills.
Grocery shopping.
Once those were taken care of,
it was  time to respond to people I’d told,
“Contact me a few days after I get back, and I’d be glad to help.”
All that took until Saturday.

Which left me as frustrated as the crazy, two week allergy elimination diet I began on Sunday has been leaving me hungry after every meal. (More on the diet tomorrow.) And I was tired. Bone tired. A wee bit out of shape. And whiny because the weather’s been rainy and cold for days. Something had to be done. So Sunday afternoon, I sat down and racked my memory for the beauty hidden in my not-too-easy week.

Once I started looking, beauty was everywhere,
in the cherry blossoms in our neighbors’ yard,
blossoms left untouched by a nip of frost.
in finding the exact watch Mom wanted to replace her old one at the first store visited.
on the heavenly red bud trees blooming in the ravine along our road.
in the forgiveness of our church Connection Group
when I totally forgot about the potluck we were hosting.

Most beautiful of all,
most heart-breakingly beautiful of all,
in the kindness of staff members interacting with a resident in Mom’s memory care unit,
as they encouraged him, though his mind is dimmed by disease, to play his trombone,
as they hummed the birthday tune to him until the notes brought back his memory,
and he played the tune straight through,
with vibrato
and rhythm
and perfect pitch.
In his fellow residents giving him a rousing round of applause,
and asking him to play it again…
and again…
and again.

And to think,
I almost missed it.