The Roots of See Jane Run! 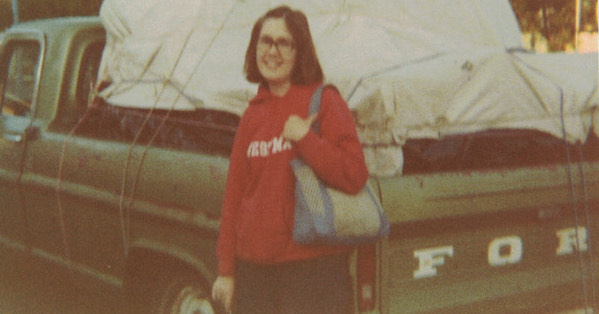 Forty-two years ago this month, the roots that eventually grew into See Jane Run! were planted. My husband (we’d been married for 10 months) had started work at Sky Ranch in northwest South Dakota. I joined him a few weeks later. My mom, my Uncle Jim, and two of his three daughters (my cousins) helped with the move.

The morning we took off, Mom snapped this picture.

It was not an easy move. Everything Hiram and I owned was packed into our used Ford pick up. The pick up proved to be less than reliable. The trip took longer than expected. The house we had rented sight unseen in the little town of Camp Crook turned out to be smaller than anticipated. But the thing that really threw us for a loop was the herd of cattle on the state highway right outside of town.

I’m still kicking myself for not taking a picture.

The image is as fresh to me now as it was in June of 1978. Maybe that’s why Jane, the protagonist of the Tipperary County mystery series, along with her uncle and mother encounter a herd of cattle lounging on the the highway in the opening chapter of See Jane Run!

While writing the scene, I did my best to paint a word picture of what Jane saw and felt in that moment.

However, Jane’s culture shock is the same as mine was. So is her growing appreciation for the unique place she moved to right out of college. Through Jane, I want to share with readers the culture and heart of the remote corner of the world where I once lived and still love.

With Jane’s help, I hope you’ll be able to picture it, too.