Do Not Hinder Them 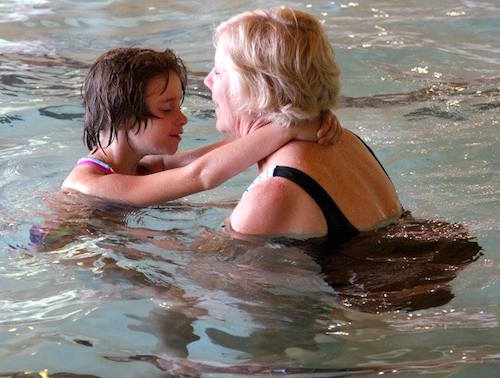 And they were bringing children to Him…but the disciples rebuked them.
But when Jesus saw this, He was indignant and said to them,
“Permit the children to come to Me;
do not hinder them; for the kingdom of God belongs to such as these.
And He took them in His arms and began blessing them, laying His hands on them.
Mark 10:13–14, 16

In the 1960s, getting to church was no easy feat for our family. Mom not only had to corral and spit shine three young children, she also had to wheel Dad to the car, lift him into the passenger seat, and stow his wheelchair in the trunk. After we arrived at church, she completed the process in reverse order before negotiating the parking lot curb and the steps leading to the front door of the building. Once inside, the only place for Dad and his wheelchair fit was behind the last pew, under which he discreetly hid his urinal. When he needed to use it, Mom wheeled him to a dark, rarely frequented corner of Fellowship Hall because his chair was too wide to enter the men’s bathroom.

Looking back, I wonder why my parents bothered to go to church with so many hindrances stacked against them. But I’m glad they persevered. Because of their determination, I came to know Jesus, and my life was changed. And because my life was changed by Him, I spent the hot and windy weekend of June 10–12 at Hidden Acres for the first annual Wonderfully Made Family Camp for kids with special needs, their siblings, and their parents.

Our goal for the weekend was to remove obstacles so kids with special needs and their families could enjoy camp. To that end, sidewalks were poured so wheelchairs could get from here to there easily. A special dock was constructed so every child could give fishing a try. A pool lift was installed. In the barn, ramps and stairs were built so all kids could ride a horse. A personal buddy accompanied each child do outdoor activities: to the pond for boat rides–the first ever for many families–to the climbing wall, the zip line, and the giant swing. Buddies helped kids complete crafts, learn Bible verses, sing songs, and play games during program time. While their kids were in being cared for, parents enjoyed a program with Gary and Barb Rosberg Friday evening, attended support groups on Saturday morning, enjoyed massages in afternoon, and had a date night on Saturday.

On Sunday morning, every elementary-age child–and I mean every, single one–went on the stage to sing Fearfully and Wonderfully Made, the song they learned over the weekend. Proud parents stood to record the moment on video in photos. For many dads and moms, it was the first time their kids had participated in such an event.

I stood in the back, watching the door in case one of the kids who tended to run made a mad dash for the exit. I failed miserably at the job because my eyes were filled with tears as I watched the children on stage. I thought of how delighted Dad would have been to see every child included and of how he would have reveled in the luxury of bathroom privacy.

I also thought of how delighted our Father was in His children–those who donated funds and materials, as well as the 104 volunteers who served throughout the weekend alongside the Hidden Acres staff members–who obeyed His Son’s command by removing every hindrance so little ones such as these could come to Jesus and be blessed by Him.