What Does It Mean To Be Baptized? 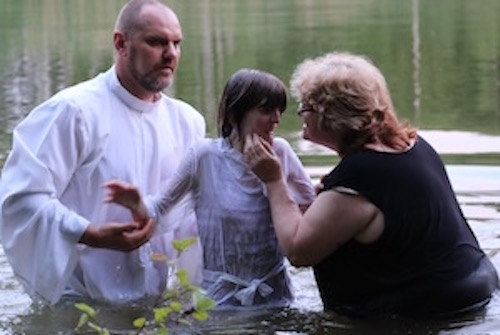 “Go therefore and make disciples of all the nations,  baptizing them in the name of the Father and the Son and the Holy Spirit,  teaching them to observe all that I commanded you;  and lo, I am with you always, even to the end of the age.”
Matthew 28:19–20

Before leaving for special needs family camp in Latvia, a number of concerns occupied my thoughts. Here are just a few: Will my suitcases be big enough to hold clothes and 30 books to give away? Will the 24 hour layovers in Istanbul, Turkey–both coming and going–be uneventful? Will conversing with moms through a translator keep us from bonding? (The answers: yes, no, and no.)

Two questions that never came to mind were the ones that dominated discussions during camp week: What does it mean to be baptized? Can people with special needs be baptized?

The topic first arose when Pastor Ugis Pallo explained the meaning of baptism during morning assembly and announced that a baptismal service would be held on the last day of camp. A young woman who is non-verbal and has mild developmental delays made clear her understanding of the sacrament and her desire to be baptized. Ugis called her home pastor and invited him to participate in the ceremony, but the man declined.

Because, he explained, her special needs were punishment for generational sin which made her unworthy of baptism.

Though the response did not sit well with Ugis, he and the other pastor talked several more times. Somehow, by the grace of God, the issue was resolved by baptism day, and the young woman’s pastor came to the service.

But the story doesn’t end there. Several young adults with special needs and moms of younger children started asking questions. A young woman named Diana found Ugis after supper. “What does it mean to be baptized?” she asked, and he answered her questions far into the night. Katie, a young mom nabbed Naomi, my travel partner, one afternoon. “I was baptized into the Lutheran faith,” she explained. “How is that different from what Ugis talked about?” During our last mom’s support group, which I always opened by asking if they had questions, the first one posed was, “Would you explain the purpose of baptism?”

I began to speak, sure that God had gone ahead and prepared for every detail of the answer. From the thorough grounding about the meaning of baptism presented in Discovery Discipleship classes taken long ago. Through the teaching Pastor Tim has provided about this sacrament throughout the years. And through the presence of my translator, who happened to be Katie, the young mom who had talked with Naomi.

The baptismal service on that last afternoon of camp was a blessed event:

Diana, who accepted Christ during the week, was baptized. 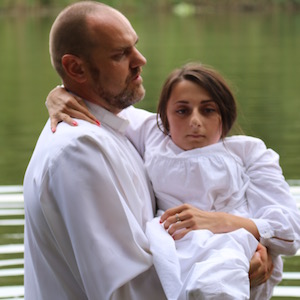 So was Laura, the daughter of the mom who asked about it during our support group. 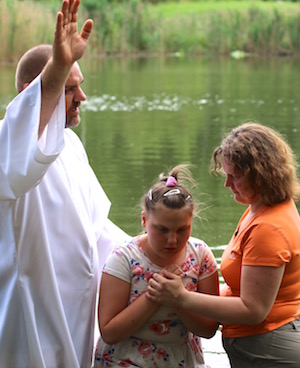 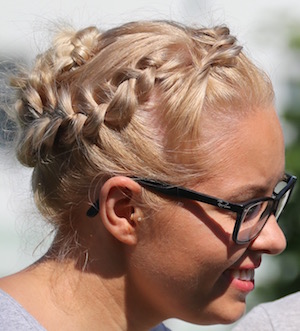 Katie scheduled her baptism for early August, so her family could witness her profession of faith.

No translator was available during the service, but it didn’t matter. The Spirit of Christ made his presence and his good pleasure known by uniting us as one and speaking to my heart as his command to make, baptize, and teach disciples in all the nations was obeyed.