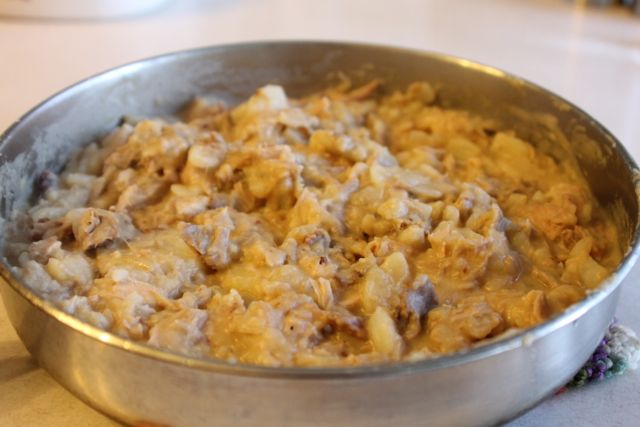 Turkey hash is one of the few recipes handed down to our family by Hiram’s mom, Elsie Philo. She was, by her own admission, a reluctant cook. Part of that reluctance may have stemmed from learning to cook in the territory of Alaska in the 1950s–on a wood stove, with limited provisions, while raising three very active little boys, and teaching school.

Fresh milk was hard to come by, even though her husband was a dairy farmer, and she added canned evaporated milk to almost every main dish. Turkey hash was no exception, and for years I made it according to her recipe. Not too long ago, I finally worked up the nerve to try it with almond milk. To my surprise, it tasted delicious. It even received Hiram’s coveted seal of approval. So here’s the non-dairy version (dairy ingredients are in parentheses) of the ultimate Philo comfort food, turkey hash.

Salt and pepper to taste at the table.